On Wednesday, January 19, 2022 Officers Kevin Goulart and Justin Buswell were on routine patrol in the area of the Dilboy Pool located on Alewife Brook Parkway. At 1:47pm they heard a radio transmission from Somerville Housing Officer Billy Rymill, who was on a nearby detail. He was alerting dispatch of a rollover involving a trailer truck in the area of Capen Court.

Officers Goulart and Buswell, who were just minutes away, immediately proceeded to the crash scene. On their arrival, they observed the truck lying on its side in the southbound lane exiting the rotary. The driver's cab had struck a tree and landed near the curb resulting in extensive damage. Without hesitation, Officer Goulart exited his cruiser and ran towards the overturned truck. Officer Buswell positioned his cruiser to block oncoming traffic and decrease the possibility of further injury.

Officer Goulart, using a section of the tree that was split in half due to the impact, climbed up on top of the cabin in order to check on the operator. From this vantage point, he could see that the driver was trapped and bleeding from his head. Officer Goulart called out to his fellow officer to bring the trauma bag assigned to the cruisers. With bag in hand, Officer Goulart retrieved bandages and handed them to the driver instructing him to press the bandages against the wound in hopes of stopping the bleeding. Officer Goulart observing the amount of blood loss, and also hearing observers yelling that the truck was starting to smoke, believed time was of the essence. Officer Goulart then climbed down from the cab and using an emergency window puncher, broke the back window and extricated the operator from the damaged vehicle. The two officers now joined by Officer Rymill, relocated the driver away from the hazardous scene. Officer Buswell now focused on rendering medical aid, while Officer Goulart assisted in managing the chaotic traffic scene. 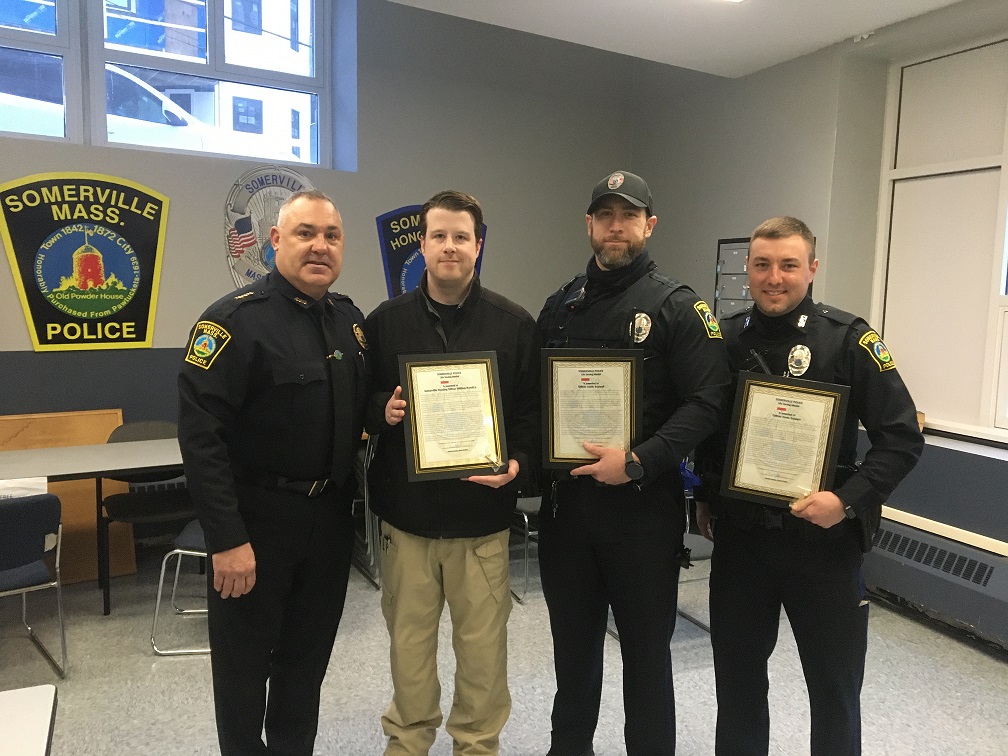 Copyright © 2023 City of Somerville Massachusetts Police Department. All Rights Reserved.
<!--This footer 2 contains the Copyright Info for Joomla on the Main Landing Page of the Site, it has been hidden as a comment. <div class="footer2">Joomla! is Free Software released under the GNU General Public License.
--!>