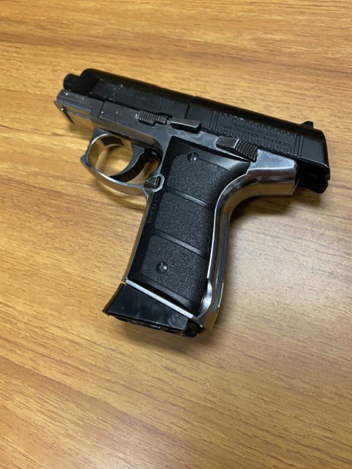 On 4/10/2021 at approximately 11PM officers were called to Innerbelt Rd for a report of a large group drinking.  While there, officers observed a vehicle leave at a high rate of speed.  Once this vehicle was stopped and police approached the car, the driver was observed clutching an object and attempting to hide it behind his back. Officers then realized the driver was holding what appeared to be a firearm.  Officers ordered the driver to drop the gun and put his hands up.  The driver complied and was detained without incident.  After further investigation it was determined the gun was actually a BB gun, however it was indistinguishable to a real firearm, including having a locking slide function.  Excellent work by officers de-escalating this situation and bringing it to a peaceful end.