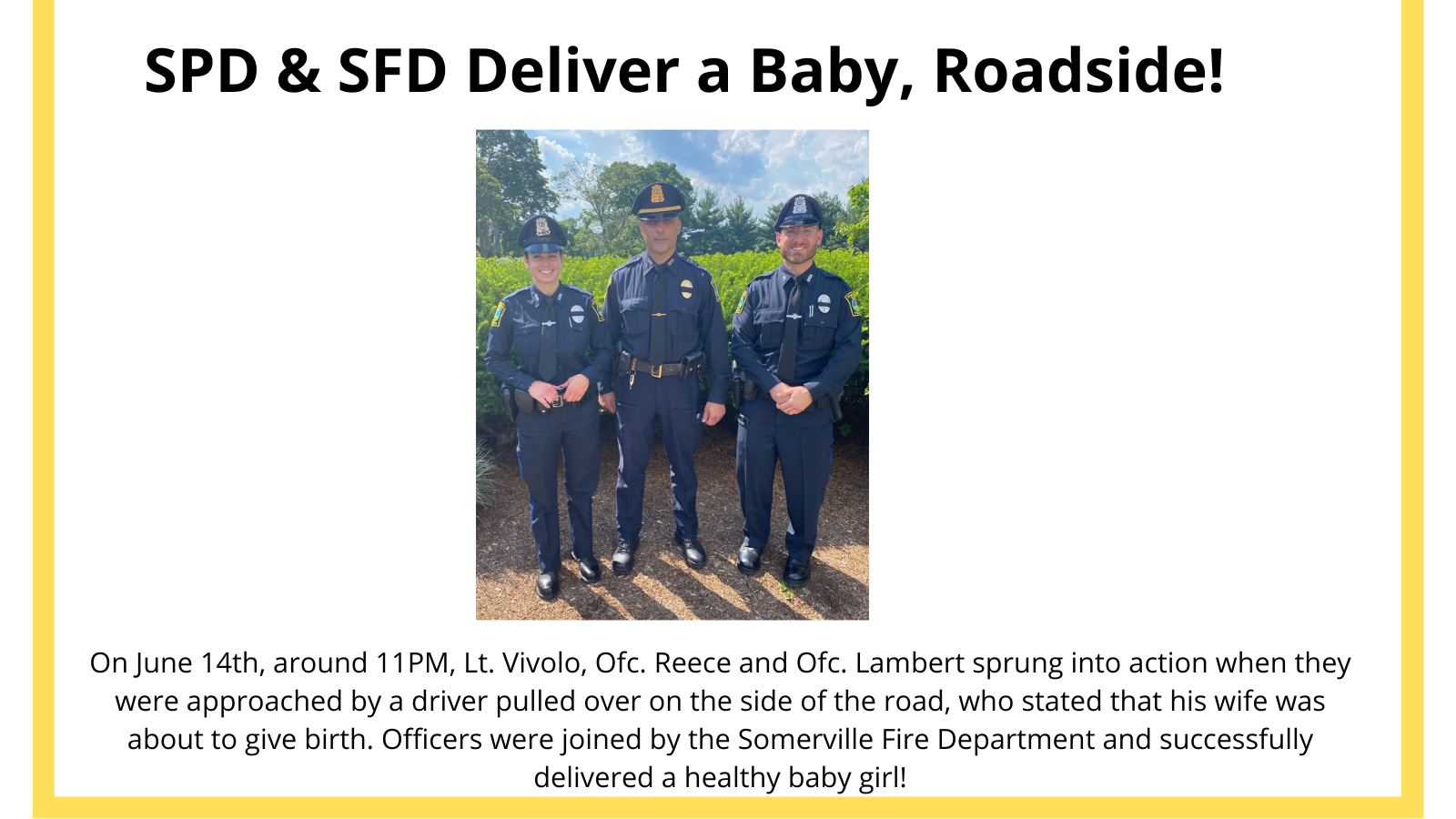 On June 14th at around 11PM the Somerville Police were on Washington St doing a follow up on an incident.  As the officers were doing this, a pickup truck pulled over and a man got out to talk to the officers.  His wife was in labor and was about to give birth.  Quickly switching roles from law enforcement to medical aid, Lt. Vivolo, Officer Reece, and Officer Dylan Lambert assisted this expecting mom.  Lt. Vivolo tried to get her comfortable and assessed her current status, while Ofc. Reece called for an ambulance, reassured her, and got information from the husband. They were on their way to Mt. Auburn Hospital, but realized they weren't going to make it.

It was clear to the officers that the baby was coming immediately, so Lt. Vivolo assisted the mother in preparing for birth, while Officer Reece looked for clean towels/clothing to catch the baby. Somerville Fire arrived and gave Officer Reece the baby birth box, which she used to assist Somerville Police Lt. Vivolo and Somerville Fire Department Lt. Alcaraz, who were helping the mother get the baby out. After the baby was out, and its nose suctioned, and umbilical cord clamped, Cataldo Ambulance arrived on scene and the officers let them take over care and got them whatever supplies they needed. The parents were extremely relieved, and Officer Reece took a few photos of them on the father's phone so they could have memories of the birth. Officer Reece heard from one of the Cataldo paramedics the next day that the hospital staff said the baby was perfectly healthy and mom was doing great.

Below is the statement of the father who wanted to commend the officers for their actions:

On the night of 6/14 my fiancé and I were on our way to Mt. Auburn hospital with a baby on way, we're live in Walpole but decided to have baby where she works. Night was all over the place, contractions started at 9pm, followed by water breaking just after 10pm, we met my parents along highway to drop off our 1 year old son. Along the way we called the hospital for help and got disconnected, we called again to meet us as for she felt baby coming.... at that time we were in tunnel, distracted I missed exit and found myself taking 99 to new route for hospital...... 12 mins away fiancé started yelling she's coming.... at that time I looked over and saw Lt. Carmine Vivolo with a two other officers, I pulled over and called out she's in labor and babys coming we won't make it to hospital. Lt Carmine and other officers came over, the female office stated she was on with dispatch and would have ambulance on way, Lt Carmine slapped on some gloves as fiancé stared she needs to push.... he gave the go and what felt like min he caught my daughter and was born @ 11:05pm. With luck on my side Lt Carmine and his crew being there at the right time and the right place was able to deliver my beautiful daughter. I am gratefully thankful and honored to have had someone like Lt. Carmine to deliver my baby. We will be forever in his debt. I would like to thank the other 2 officers with him that days, but never caught there names... I'm very thankful for the police dept and the fire dept in there hall and assistance.