22024103: On 5/4/22 at approximately 3:03 PM, Somerville Police responded to Grant St for report of a past assault. Upon arrival, officers spoke with the juvenile female victim who stated she was assaulted by three females while walking home from school.

Two Arraigned in Connection to Shooting at Mystic Ave

On May 3, 2022, the Somerville Police Department arrested two individuals for their involvement in a shooting that occurred on February 20, 2022 at 500 Mystic Avenue.  Police arrested Amanual Beshah (19) of Malden and charged him with armed assault with intent to murder.  Police also arrested a 17 year old juvenile former resident of Cambridge for the charges of armed assault with intent to murder, unlawfully carrying a firearm, assault and battery with a dangerous weapon and discharging a firearm within 500ft of a building.  A search warrant was granted for this juvenile’s home and police recovered a 9mm firearm during this search.  The same caliber weapon used in the February 20th shooting. This investigation remains active.

22020019: On 4/14/22 at approximately 10:00 AM, the pictured individual was riding his bike on Somerville Ave and punched an officer who was on detail. The individual continued to flee through the intersection of Somerville Ave & Mossland St. The individual was described as a thin, white man, early 30's, with a beard, wearing a black helmet, a black long sleeve bike shirt and black bike shorts/capris. Anyone with information, please contact the Somerville Police Department at 617-625-1600. 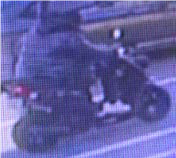 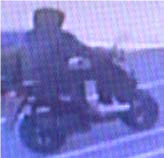 22021105: On 4/19/22 at 4:27 PM, the pictured individual entered a business in Assembly Row and proceeded to steal a take-out order. The suspect then brandished a knife at an employee and threw the food at him. The suspect was described as wearing a black Canada Goose jacket, blue jeans, purple Nike sneakers and carrying a black backpack with the word "Supreme" written on it. Anyone with information, please contact the Somerville Police Department at 617-625-1600.

22021897: On 4/23/22 at approximately 10:56 AM, Somerville Police responded to a vacant building on Marshall St for report of a vandalism. Upon arrival, officers observed a side door of the building was pried open. Nothing was reported missing.